This research sought to determine whether natural trehalose sugar found in a particular desert plant could prove effective for treating the symptoms of Huntington’s disease. The Riken Brain Science Institute in Japan had done a study, 2004,  and found positive influences on mice in a Huntingtons Disease model after the commercial available trehalose. The supposition for us pursuing this work was that, if commercial available trehalose had some beneficial effect perhaps a natural form of trehalose would have an even greater benefit.

Huntington’s disease is an inherited illness that causes profound cognitive and movement problems. Approximately 900 New Zealanders presently suffer with Huntington’s. There is no effective treatment currently available for this disease.

In 2004 scientists at the RIKEN Brain Science Institute in Japan published results of their study that showed particular promise with the compound trehalose at inhibiting the clumping of misfolded Huntington proteins in a mice model. The blocking of the clumping that occurred, delayed the disease’s onset in the mice, improved their motor function and extended their life. Trehalose is found in certain desert plants, and during extreme drought conditions, levels of trehalose of up to 20% have been recorded in the leaves of Selaginella lepidophylla (The Resurrection Plant), a plant native to the deserts of Texas, New Mexico and Mexico.

No plants previously existed in New Zealand with this trehalose sugar.

In May 2007, the Heritage Food Crops Research Trust applied to ERMA (the Environmental Risk Management Authority) for consent to import this plant, in order to study it and determine how it could be used to treat the symptoms of Huntington’s disease in humans.

Huntington’s disease is an hereditary disease and therefore any cure will require a genetic solution. Given that the understanding required to effect this may be at least two hundred years away, we believe that the best that can be achieved at this time is to look to effectively treat the symptoms of the disease, for which there is currently no treatment available.

ERMA reviewed the application and in consultation with MAF and DOC, approved the importation of the plants into our plant containment facility for this study.

After growing these plants for a year, it was time to have them tested to begin evaluating their potential against Huntington’s. We approached Dr Bronwen Connor, Associate Professor in Pharmacology & Clinical Pharmacology at Auckland University. She agreed to conduct a QA lesion model – testing rats for 25 days. QA lesion models have been used widely to test potential compounds for Huntington’s disease. They replicate the effects of Huntington’s by using quinolinic acid (QA) to kill cells in the region of the brain most effected by the disease.

We processed Selaginella lepidophylla plant material into a dried powder and sent this to Dr Connor. 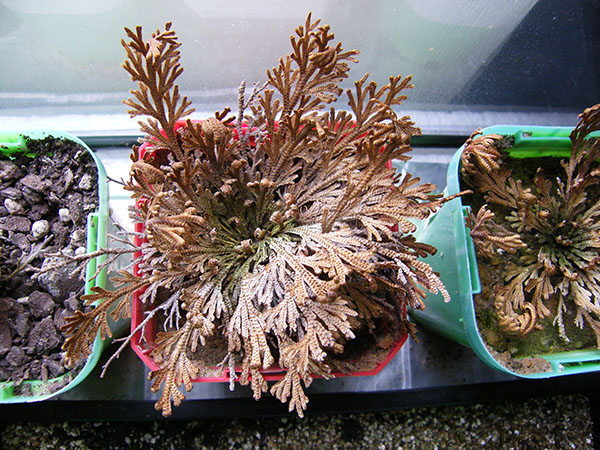 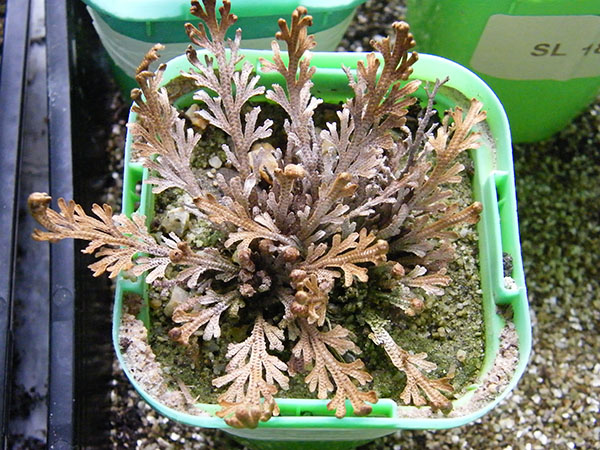 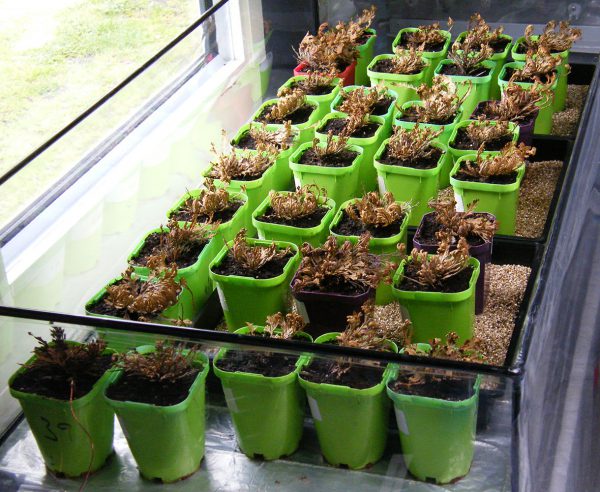 Our sample of dried Selaginella lepidophylla powder contained approximately 10mg/g DW trehalose. A number of other sugars extracted from this sample were eluding at a similar time. The sample also had approximately 7mg/g DW sucrose.

Note: There is one peak labelled as ‘Adonitol’, but this has not been verified. Also other peaks that elude early have not been able to be verified with any C6 sugar standards, likewise the peak at 15.18 minutes.

Dr Bronwen Connor tested our Resurrection plant dried powder in an initial Huntington’s rat model. Unfortunately this model detected no effectiveness for our powder. A lack of effectiveness in this QA (Quinolinic Acid) model does not mean that Trehalose (the natural plant sugar in our Resurrection plant powder) will not have an effect on the disease progression in a full Huntington’s transgenic model. It simply tells us that the effect is not based on cell protection.

The QA model used was available and affordable at the time. Unfortunately a lack of effectiveness shown in this initial model will mean that we are unable to raise the necessary funds for the next stage of testing – being a 12-18 month mouse or rat Transgenic HD model (which would cost NZ$65,596). Realistically we have done the best we can in this area with our limited funds. We therefore contacted one of the scientists at the Japanese Riken Brain Science Institute who was involved with the initial work on trehalose for Huntington’s, and offered them the 3.3 kilos of dried powder we have remaining (in the hope that they could use it in one of their models). Unfortunately we were advised that their lab is scheduled to close in two years time and they are also constrained in how much work they can undertake. We will endeavour to find another researcher, somewhere in the world, in the hope that they can continue this work, which we remain convinced is the correct approach at this time for the treatment of symptoms of the disease.

Ultimately our vision would be for families with Huntington’s to grow their own plants so that they can treat the symptoms of their own condition. This is an empowering model that allows sufferers to have a degree of control over the process of maintaining their own wellness. It is also a low-cost approach. Naturally there is quite a way to go before that becomes a reality. As more research is done in this area, a greater understanding of the inherent medicinal qualities of these plants will emerge. Each stage of processing will diminish the inherent medicinal quality of the plant material. For our study we dried the plant material and then processed it into powder form. If we have the opportunity to conduct a further study in this area, we may look to maintain the integral structure of the material through utilising just the drying process, and then perhaps steeping that material in a tea, which should further optimise the medicinal compounds available.

Huntington’s Disease was diagnosed as an inherited disorder more than 11 years ago, yet the mutation that causes it was not discovered until 1993. A DNA test on a blood sample was quickly devised to reveal whether a person carried the abnormal form of the gene, which leads to progressive destruction of the brain, crippling muscles and mental function.

Currently there is no effective treatment or cure for the 900 New Zealanders, or the many thousands worldwide who have been diagnosed with the disease.

The Huntington’s test is so certain because the disease is caused by a single gene – the Huntingtin Gene on chromosome 4 (the name of the gene is spelled differently than that of the illness). Typically the gene contains several occurrences of a set of DNA building blocks: cytosine, adenine and guanine, abbreviated as CAG. This set drives the production of the huntingtin protein. The more often the CAG sequence comes up in the gene, the more glutamine – an amino acid – in the Huntingtin protein. In healthy genes the CAG sequence may appear up to 28 times. But if it occurs more than 35 to 40 times, the glutamine chain in the Huntingtin protein becomes too long and causes trouble. The larger the number of CAG sets, the longer the chain, and the earlier and more severe the disease.

The genetic mutation that overproduces the CAG sequence is inherited from a single parent. A child, therefore, has a 50 percent chance of getting the disease-causing form of the gene if either parent has it. Disease symptoms typically begin when carriers are 35 to 45 years old, but even among close relatives the onset and course can differ significantly.

Huntington’s disease had been known for centuries before it was given its definitive name. In the Middle Ages, victims of what was then called “the dance” made pilgrimages to Ulm, Germany, to pray in the chapel of Saint Vitus, leading to the ailment’s name, “Saint Vitus’ dance”. The first to recognize the condition as an inherited disease was the young American Neurologist George Huntington in 1872; together with his father, he had tracked cases in a family on Long Island, outside New York City, and was able to differentiate them from chorea minor, caused by a streptococcal infection that has similar symptoms. Today about one in 10,000 people in the US suffers from Huntington’s. There are about 900 people suffering from Huntington’s in New Zealand.

The symptoms that gave the disease its original name are the “dancing” movements. The exaggerated motions of the limbs that are its most frequent and striking effects. In the beginning, patients try to disguise these jerks and twitches as shrugs or try to translate them into deliberate motions such as stretches.

But little by little their muscles go out of control. They are beset by sudden grimaces, and speaking and swallowing become increasingly difficult. In later stages, movements are slower; increased muscle contraction leads to painful contortions of the limbs that can last minutes or hours.

Characteristic mental symptoms often appear decades before the physical problems. The disease can cause repeated outbreaks of moodiness, yet patients who receive a positive test result can also fall victim to emotional swings driven by their knowledge of impending destruction. Relatives often notice personality changes – patients may become paranoid, tyrannise those around them with unfounded jealousy or react extraordinarily aggressively to trivial disagreements.

As the disease advances, they may obsess about minor issues for days or weeks, burdening their families and destroying their social connections. Patients’ cognitive abilities also wane; their memories deteriorate, and they find it increasingly difficult to concentrate. The problems progress to severe dementia and complete helplessness. Even early in the disease, the mounting mental breakdown can have catastrophic effects on a person’s personal and professional lives, and suicide attempts are not unusual.