History of the Tomato

One of these tomato varieties contains lycopene that is more easily absorbed into your bloodstream, and therefore better for you. Can you tell which one?

Our History of the Tomato 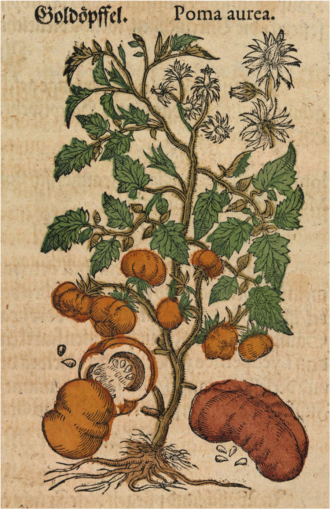 In 1544 an Italian herbalist, Pietro Andrae Mattioli, published a reference to mala aurea, or “golden apples”, which he described as flattened like the Melrose {sort of apple} and segmented, green at first and when ripe of a golden colour. (1)

These first tomatoes were introduced into Europe following the Spanish conquistador Hernan Cortes’s conquest of New Spain (Mexico),  which lasted from 1519 to 1521. (2) The golden colour of these tomatoes would have come from the tetra-cis-lycopene they contained, which exhibits colour within the golden to orange colour spectrum. These tomatoes would have been cultivated in Mexico for centuries.

This original form of the cultivated tomato, with its orange form of lycopene was and is, easily absorbed by the human body when consumed raw. This tetra-cis-lycopene behaves as would be expected, with reducing levels when processed through heating. Although studies have shown that the reduced tetra-cis-lycopene levels in tomato sauce and juice are still higher than the all-trans-lycopene levels in red tomato sauce and juice.

European explorers discovered red tomatoes growing in Peru and Northern Chile. An early Latin name for these tomatoes was ‘Poma del Peru’. There is no record of tomatoes being cultivated or consumed in Peru (3) and it is therefore likely that these original red tomatoes were tiny currant tomatoes found growing wild. These varieties would likely have sprawled over the ground providing food for birds and small animals for whom their red form of lycopene (all-trans-lycopene) may be more easily absorbed (than it is by humans).

Europeans in the 1500’s had no cultural knowledge or history of tomato use to draw upon and hence there were initial concerns over whether tomatoes were safe to eat. Furthermore there was of course no recourse to scientific analysis to discover the difficulty of absorption of the red form of lycopene (all-trans-lycopene) and that all-trans-lycopene was a dominant gene compared to the golden/orange tetra-cis-lycopene, which is a recessive gene. So that when someone crossed the two varieties and produced a larger red tomato that appealed to consumers, there was no understanding that the dominant red form of lycopene (the one more suited to animals) was retained and the golden/orange form of lycopene (tetra-cis-lycopene) (the one suitable for human absorption) was removed.

Hence, 500 years after the European discovery of golden tomatoes being grown in Mexico, science is still unravelling the mystery of the health benefits of tomato and re-discovering the greater potential that lies within golden/orange tomatoes.

In tomatoes the compounds neurosporene and zeta-carotene exist only with tomatoes containing tetra-cis-lycopene and the compounds phytoene and phytofluene have relatively high levels in tetra-cis-lycopene tomatoes compared to minor levels within all-trans-lycopene tomatoes. It is the potential of the synergistic relationship between these compounds and their ability to exert superior health benefits that is exciting the researchers at Heritage Food Crops Research Trust.

(2) Gentilcore David Pomodoro A History of Tomato in Italy p.3