In 2017 we grew 25 carrot varieties that ranged in colour from white to black varieties. Our objective was to try and find the best ones for human health. We had each variety analysed for carotenoid and polyphenolic compounds.

It is important to understand the history and original form (as much as possible) for a food, because from our understanding that original form is likely to have the right components in appropriate relationships and structures to provide the greatest medicinal benefit. Modern commercial breeding with its human control over the plants natural reproductive process interferes with the delicate balance of synergies that need to be established between the compounds. As colours are altered by man, some key compounds can in turn be altered or completely disappear.

The modern orange carrot is largely a product of breeding begun by Dutch growers in the 16th century. With the rise of William of Orange and the House of Orange being represented on the Dutch flag at the time, orange carrots were adopted with patriotic fervour. So much so that they are now considered the ‘normal’ carrot, rather than another of man’s creations.

According to Philipp Simon at the USDA “There were a few orange carrots before 1600, most certainly in Spain, but most were purple and yellow in that pre-1600 era. From what we know, red and white carrots had not yet been developed at that time.

Yellow carrots, now and quite certainly then, contain predominantly one pigment – lutein.

Purple carrots always contain anthocyanins, which in the case of carrots are almost exclusively a collection of 5-6 cyanidin derivatives. These 5-6 compounds specific to carrot are well-characterized. The pre-1600 purple carrots noted in historical documents were actually quite certainly purple on their outer storage root surface, sometimes with purple colour penetrating well into the cortex (phloem), but likely never with purple colour occurring in the core (xylem). 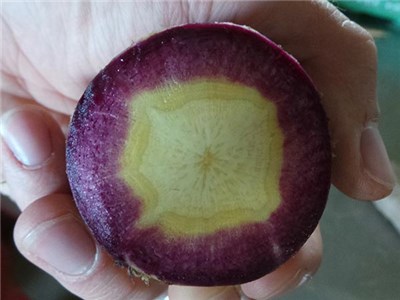 The background colour of these nominally purple colour was quite certainly yellow, so the pre-1600 carrots referred to as “purple” were actually purple with yellow inner phloem and xylem, so they actually contained both the 5-6 anthocyanin pigments plus lutein. The purple tissue in these purple-yellow carrots also contains as much lutein as does the non-purple, yellow tissue of a given carrot root. You just can’t see it since it’s masked by the anthocyanins.

Black carrots, for which I am not aware of any pre-1600 mention, are simply dark purple carrots and contain the same compounds as paler purple carrots”.[1]

A reliable form of this original carrot that we have found is the Gniff Carrot (pronounced Niff). There is an excellent YouTube video on this carrot here: https://www.youtube.com/watch?v=jc-Fmbk3cZs

As has happened with tomatoes, the majority of research into the health benefits of carrot has concentrated on looking at the predominant compound (in this case beta-carotene) in modern orange carrots. Whereas the combination of anthocyanins together with lutein in the Gniff ancient carrot is likely to have significant benefits for human health and has yet to be investigated by modern science. Our research found that the Gniff carrot had very high levels of chlorogenic acid as well as lutein and an anthocyanin. Other varieties that we found of interest were a Turkish carrot named ‘Black Anotolean’, which is actually a purple variety, and a carrot called Synsdu Violette (Syrian Violet).

We would encourage further research into carrots. In particular it would be interesting to test different accessions of the Gniff carrot. 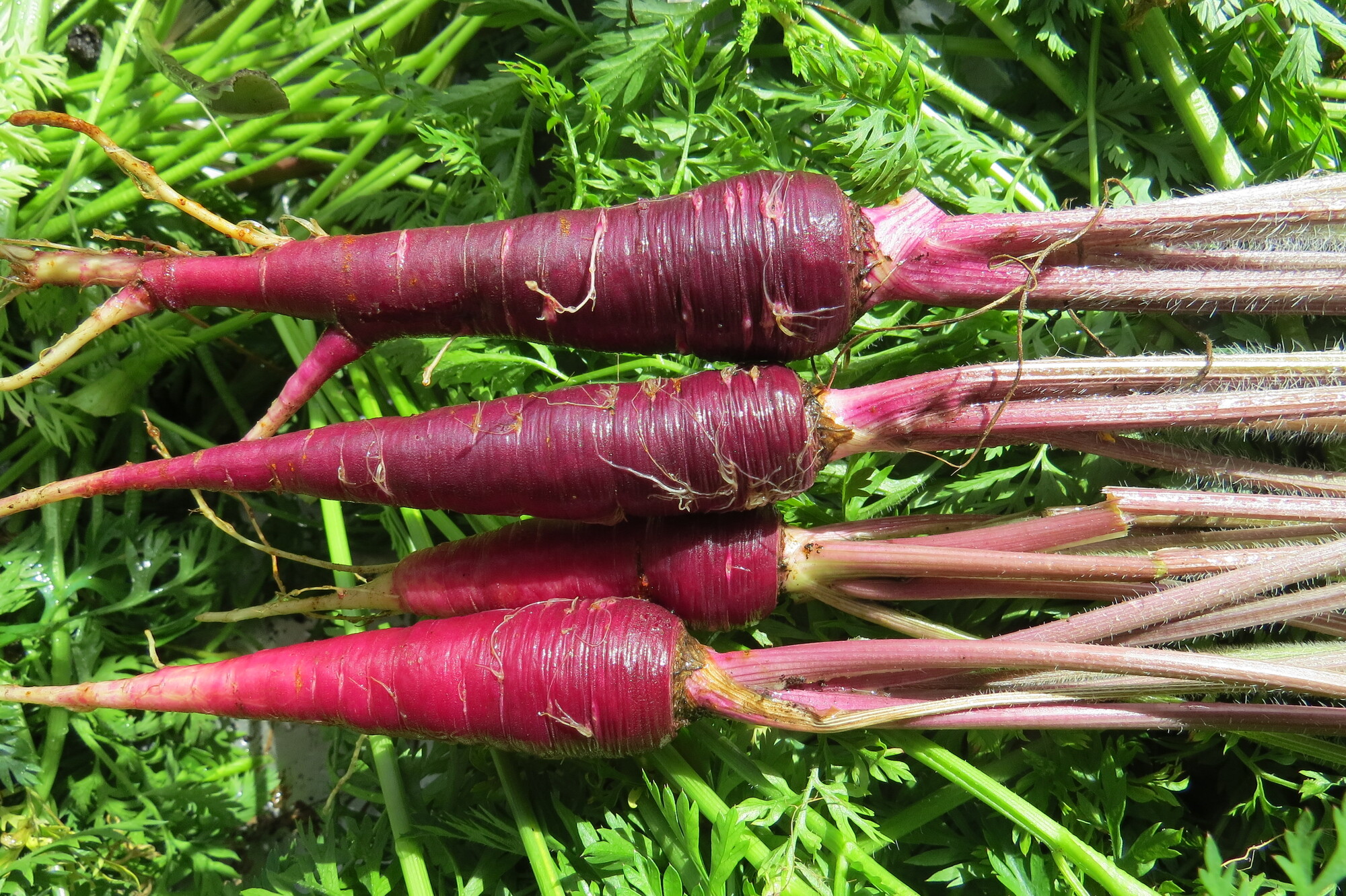 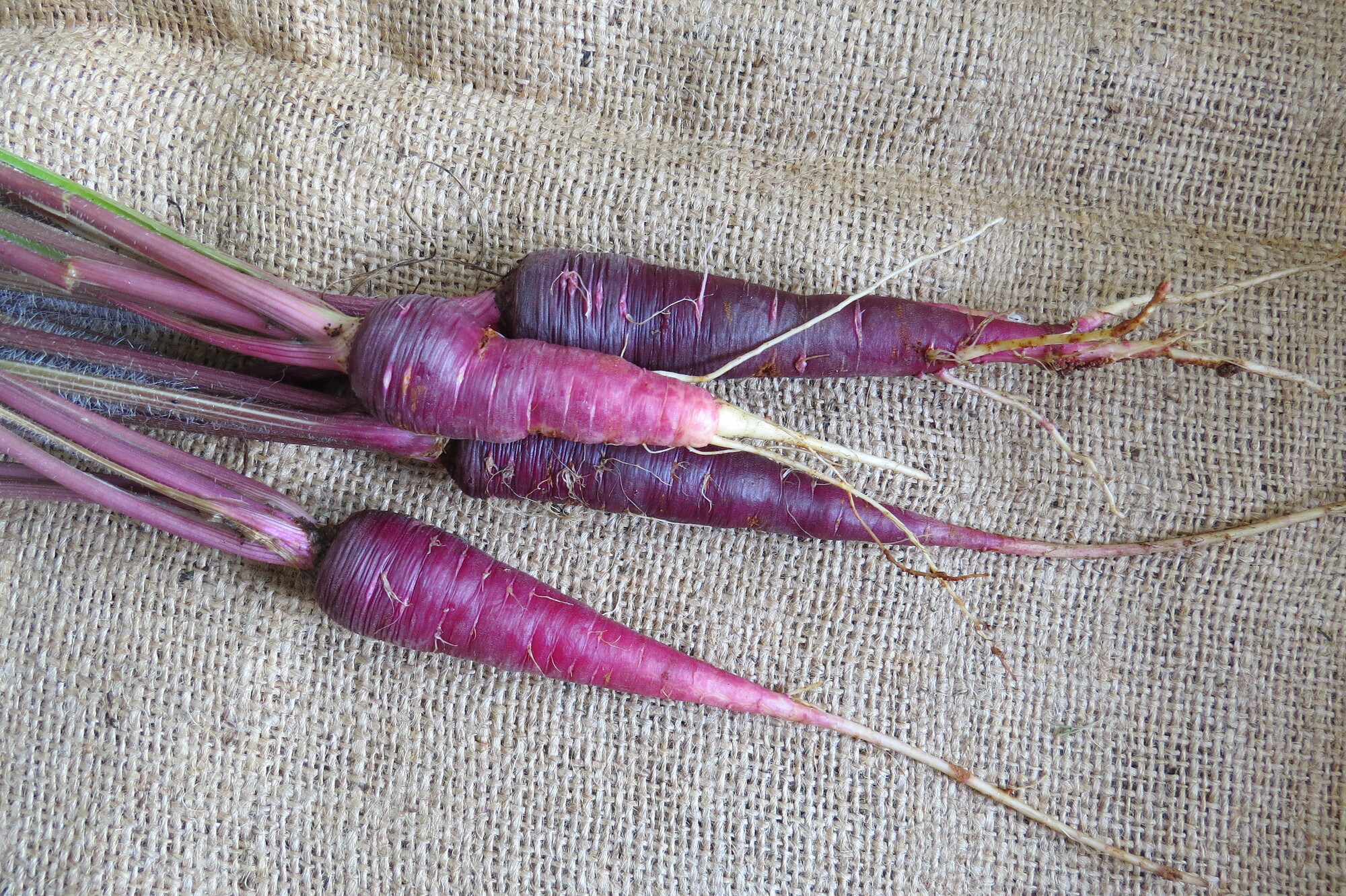 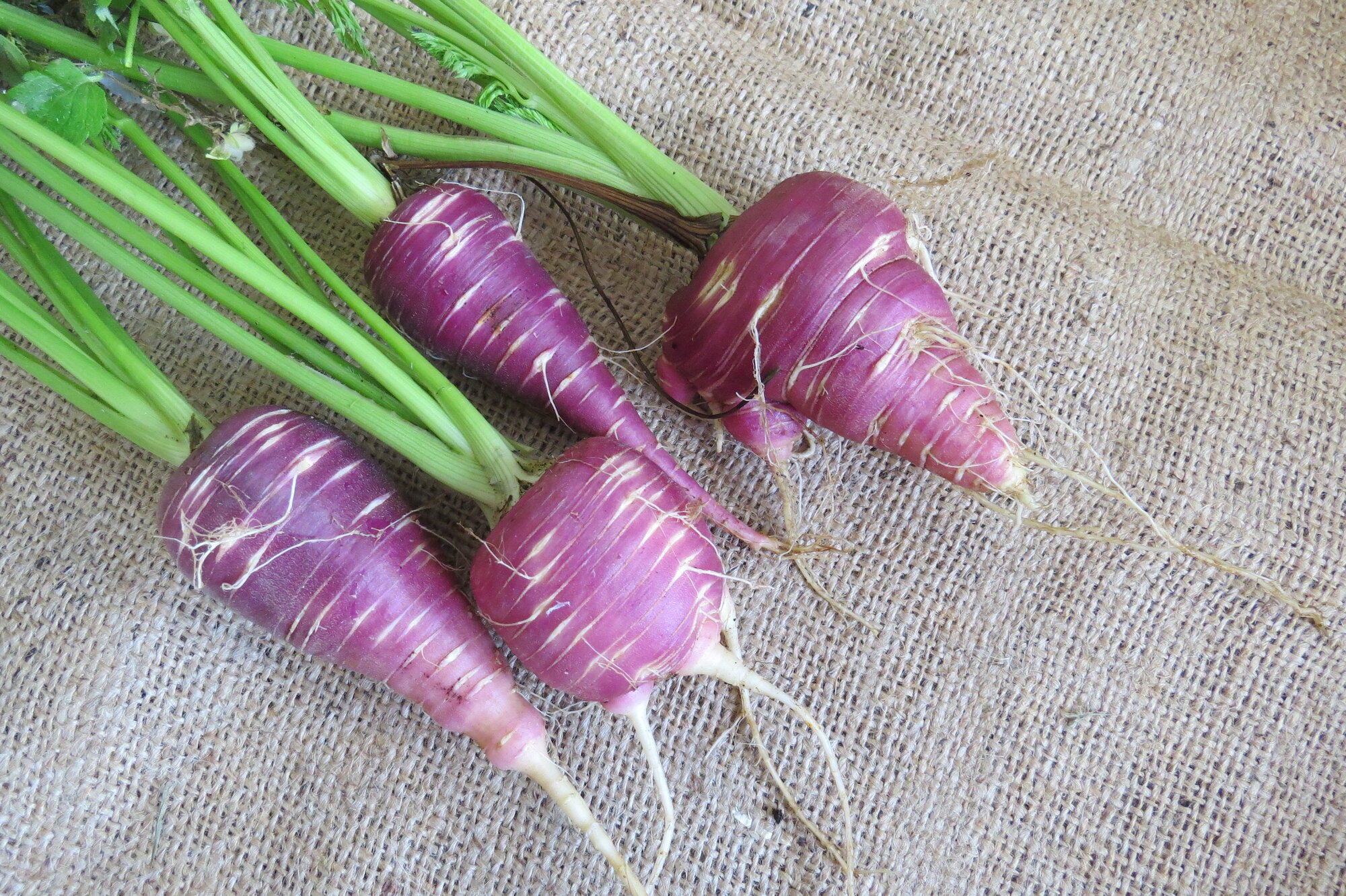 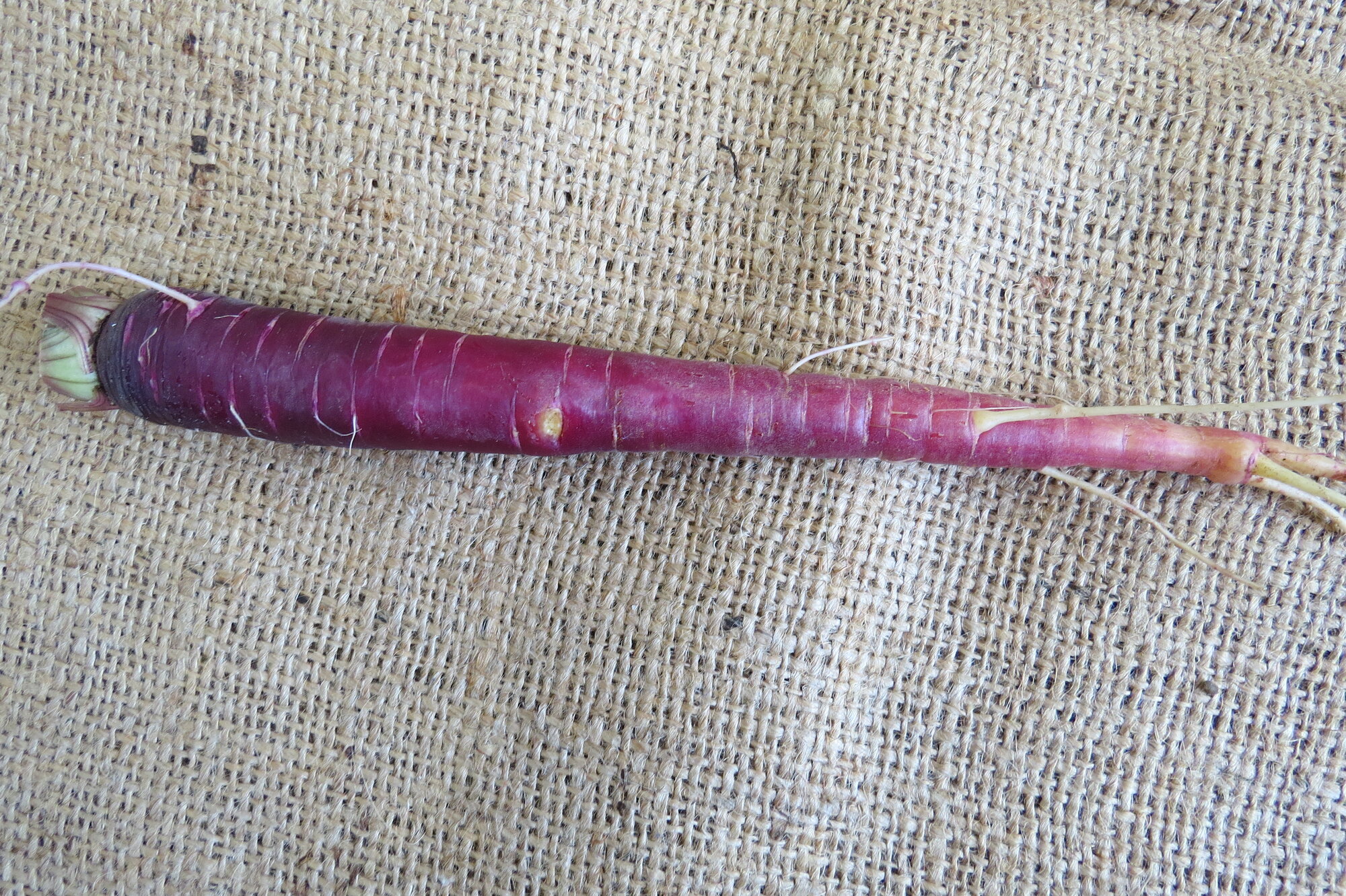 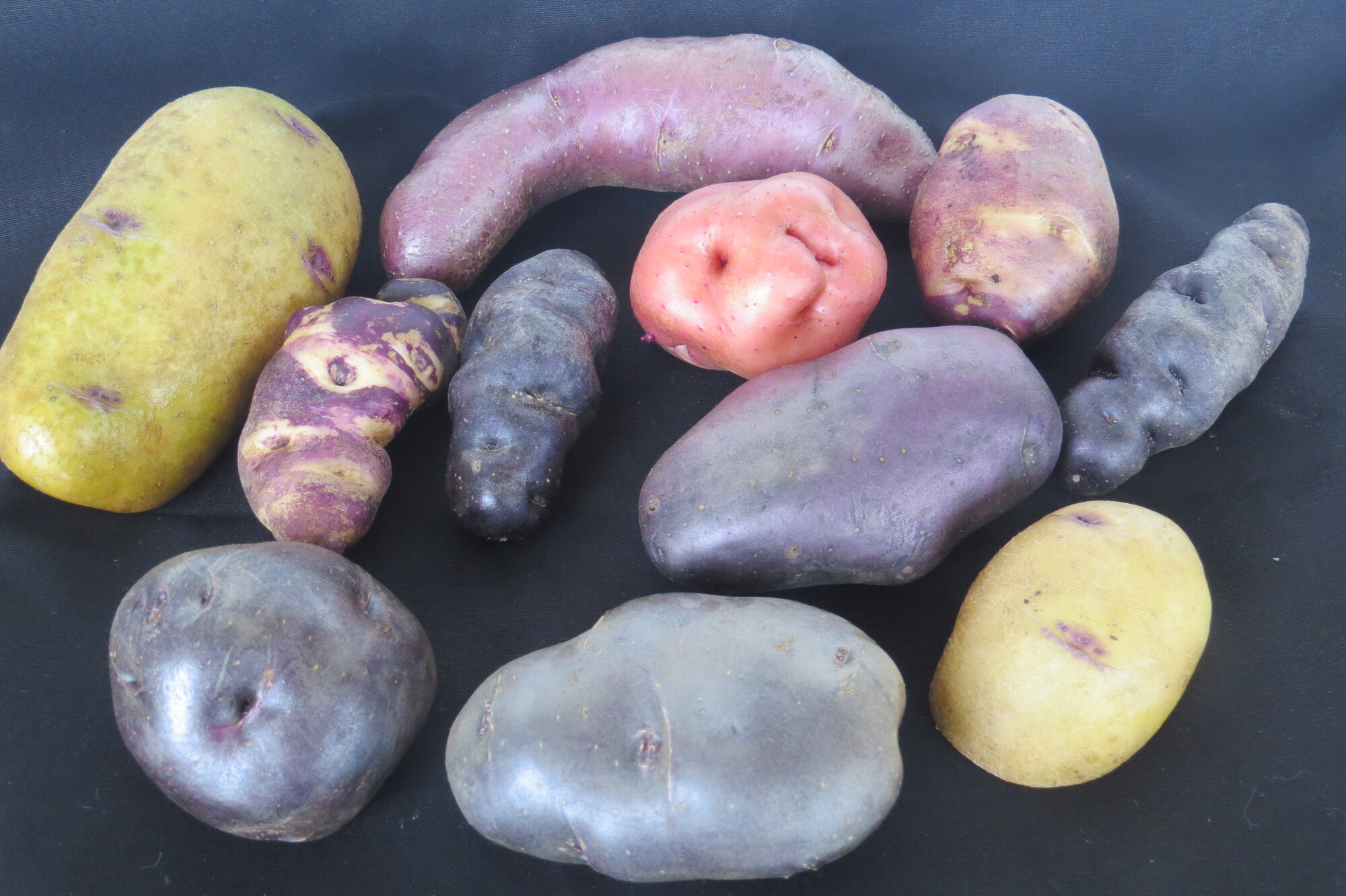